On June 24, 2021, Google announced an updated timeline where they delayed plans to phase out third-party cookies in its Chrome browser until... 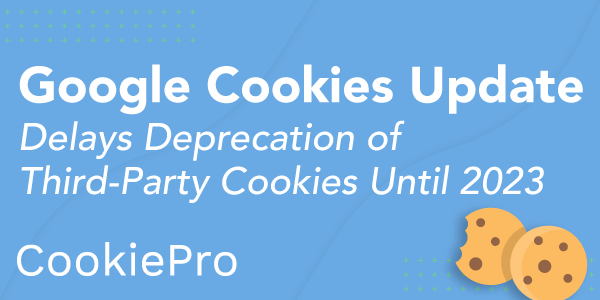 On June 24, 2021, Google announced an updated timeline where they delayed plans to phase out third-party cookies in its Chrome browser until 2023. This timeline is over a year past its previous 2022 date. Despite this extension, other browsers such as Safari and Firefox have already implemented some default blocking against third-party tracking cookies. This emphasizes that it’s never too early to start your plan of action for when third-party cookies are removed from Chrome.

Why is Google Extending its Plan to Remove Third-Party Cookies from Chrome?

Generally, there are a few key things you need to know:

Google announced the delay in a blog post that describes the decision to phase out cookies over a “three-month period” in mid-2023 is “subject to our engagement with the United Kingdom’s Competition and Markets Authority (CMA).” Essentially, Google plans to work more closely with regulators to come up with new technologies to replace third-party cookies for use in advertising.

The company is promising a “more detailed schedule” will be posted on its Privacy Sandbox website. Google’s blog mentions, “After this public development process, and subject to our engagement with the CMA, our plan for Chrome is to phase out support for third-party cookies in two stages.

These stages consist of:

“Once testing is complete and APIs are launched in Chrome, we will announce the start of stage 1. During stage 1, publishers and the advertising industry will have time to migrate their services. We expect this stage to last for nine months, and we will monitor adoption and feedback carefully before moving to stage 2.”

“Chrome will phase out support for third-party cookies over a three-month period finishing in late 2023.”

What Does This Mean for Your Organization?

Even though Google has provided an extension, that doesn’t mean companies should put a pin in their plan of action for third-party cookies deprecating. Building trust with customers has been the motivator for browsers to do away with third-party cookies. The shifts regulations have encouraged in privacy practices over the past few years make it clear marketing trends are moving towards transparency. Privacy legislation has also helped shift consumer expectations and awareness.

People increasingly want to know what types of data websites are gathering about them and how they’re using it. There are other ways to launch hyper-targeted, measurable campaigns, collect data directly from consumers, and protect revenue. Alternative methods of data collection will also prove to consumers you’ll respect their privacy and data as well as provide a value exchange for it. We expect to see organizations take different approaches to the end of third-party cookies.

This is why planning is a key step to creating a sustainable and privacy-focused competitive advantage. A Consent Management Platform (CMP) is still needed in order to comply with regulations and capture consent for other types of cookies and tracking technologies.

In fact, one of the most reliable methods is capturing first-party data, information collected directly from your customers, including data from behaviors, actions, or interests, and building your own data set to target. This approach will help maximize personalization and revenue based on the reliability of the data collected from customers.

Watch our webinar: RIP Third-Party Cookies: How to Prepare, and Why You Still Need a Cookie Banner

Next Steps to Learn more about the end of third-party cookies:

What is A/B Testing?

How to Maximize Trust-Driven Consent Opt-Ins