Apple iOS 14.5: How to Prepare with CookiePro 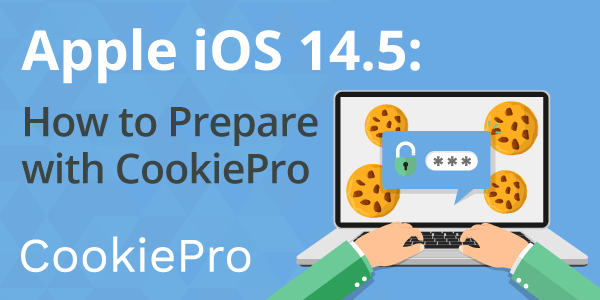 Most importantly, the update includes major privacy upgrades such as prompting users with a question: Do you want apps to track your digital activity across other companies’ apps and websites?

While this question may seem like a simple update, the app tracking transparency prompt requirement is changing the mobile app advertising and privacy landscape.

What is the Apple iOS 14.5 App Tracking Transparency Requirement?

The App Tracking Transparency is a new feature centered around an Identifier for Advertisers (IDFA). The IDFA is a string of characters that identifies user activity and data without using a user’s name. The iOS 14.5 update will now require apps to request permission from users before tracking them across other apps and websites using an IDFA.

The IDFA is considered to be the third-party cookie of mobile apps and is heavily relied upon to track users across applications. Until now, it’s allowed the personalization of third-party ads, analytics, and attribution.

There’s no denying the increase in demand and focus for more transparency from consumers and regulators. As data privacy regulations continue to be passed locally and across the world, organizations must adapt.

Apple has been the leader of privacy-first software and devices before major regulations, such as the GDPR and CCPA went into effect. They have made it clear – their decision isn’t simply to answer a public outcry but to create a long-term and sustainable privacy ecosystem.

“We believe privacy is a fundamental human right, and our teams work every day to embed it in everything we make,” said Apple senior VP Craig Federigh.

How Does it Work?

To satisfy the increased attention and concerns from privacy organizations and consumers Apple, in addition to other large tech companies, created a solution that goes beyond device screens and website browsers.

The Apple iOS 14.5 update requires an app tracking transparency prompt. Users will be able to decide if they want apps to track and share their data with app owners and third parties, despite what the end user’s local jurisdiction recommends.

When a user decides not to opt-in, they cannot be presented with the option again. This is a key reason why companies need a robust consent management platform (CMP) such as CookiePro, to provide users the option to customize their journey within applications. By implementing a customizable CMP for their mobile apps, developers can provide users another opportunity to opt-in again.

Additionally, pre-prompts allow organizations to present a customized prompt prior to the app tracking transparency prompt. Pre-prompts give organizations a chance to inform the user about how the tracking will be used to enhance their experience prior to asking for permissions. It’s important to make the most out of this prompt, as Apple only allows applications to ask for permission once. CookiePro SDKs help maximize consent opt-ins without developer effort by allowing organizations to customize the image, text, translation, and branding of this pre-prompt.

Companies are also maximizing opt-ins through just-in-time consent prompts, also known as contextual consent prompts. The contextual consent notice breaks the longer privacy policy into short, manageable segments for consumers as needed. For example, when a user logs into their mobile bank account application and would like to use the map feature to find the nearest bank, the application is able to ask for consent to use their location, but only when accessing the map feature.

Get Ahead Today with CookiePro

Following in Apple’s footsteps, other tech companies are sure to implement significant privacy changes of their own. But you don’t have to do it alone!

CookiePro’s Mobile App Consent solution is designed to assist iOS app owners to scan their applications. The scan results allow you to understand the data being collected for the required App Nutrition Label. You can also customize an App Tracking Transparency pre-prompt to display device permission notices for pre-release testing purposes. Additionally, you can use the tool to measure the impact and performance of app tracking transparency prompts.

How to Capture and Share Consent Across Domains and Devices

Google Play Data Safety Requirements: What Are They & How To Prepare

All About CookiePro: Our Story